This was sent in and my response is: I am not really sure when yet I will release that audio because I am first collecting up more info on all these girls on his site that don’t want there pictures there and there horror stories about John. I think this hour and a half of Audio will be the final nail in John Steven Forbush’s Coffin. Lets save the best for last.

John is doing the same thing Monica Foster, Mercedes Ashley, Christianx and just about any other moron did when they went up against the bull and kept getting the horns. They are quiet for a bit, trying to see if the bull goes away  but after the bull keeps horning them they will come back and try for another win but fail and get the bigger horn again and then run again. Usually takes a few good hornings for them to give up and run and hide and STFU. What a entertaining Rodeo the industry is.

Speaking of Mercedes Ashley, is she dying of cancer or was that another scam to get money from John’s again? Anyways here is the post sent in. As for Michael Thomas Strother, well lets just say he is not going to be to happy with John.

Hi Gene when will you be releasing the audio anonymously sent in where John Forbush trash talks and insult the lesser site operator and several others while boasting of how and what he does with the personal information of others. We understand it is 100% John Forbush’s voice vetting his own personal disgust of several of his friends within his inner circle just to save his own ass. Normally we would expect his circle to be quite large in order to fit his disgusting fat body sweating profusely excreting resins of meth and puss but as it turns out the circle in question is quite small there is no one left inside including John Forbush.
ladies and Gentlemen has John Forbush left the building ?
He will be greatly missed 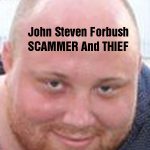