During the litigation of the lawsuit against her, Monica Foster’s so-called “evidence” consist of words and pictures that she used illegally violating copyright laws.

2016 is going to be the year that her victims, especially Matt Holder whom she stalked for the last 7 years, will all get the Justice that they deserve. 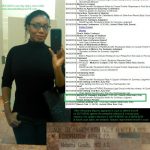