Monica Foster truly doesn’t like it when people attack her and it shows. This life long failure spent her early Saturday morning on Twitter crying.

As we have proven so many times, Monica Foster can’t handle what she dishes out.

She attacks people in her shitty blogs and defames people 24/7. She states that what she writes is factual and true, yet she provides no evidence.

This website, PWL, & TRPWL have ALL published nothing but facts about Foster and how pathetic she is. Foster is mostly upset because her websites and blogs get little to no traffic. Hell, she even called Tompkins a couple of times and begged him to stop writing about her.

Well, all these postings about Foster will continue until she accepts defeat and she removes ALL of her defaming postings about those who she claims to be affiliated with Organized Crime. She won’t agree to this and move on in her life because her life sucks and she’s desperate for love and attention.

She thinks it’s fun making fun of people with her shitty cartoons that aren’t even a real depiction of the person that she attacks. She wants to try and ruin people’s lives with her shit blogs and posting lies about people on thedirty.com and other websites.

She harasses EVERYONE who affiliates with those that she hates.

She tries to ruin friendships, get people fired from their jobs, and does all that she can to try and prevent people from succeeding in life and achieving anything. She twist facts around, spews lies like a sewage pipe that burst open, and she harasses people from creating dozens of fake Twitter accounts.

Obviously she LOVES being made fun of and acting like she’s the victim. What a fucking loser! 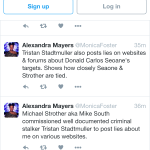