Fake Christian and failed sex worker, Monica Foster continues to preach her bullshit about life when she doesn’t know jack shit! Fostard was preaching that this world is screwed up because of vanity, well, Fostard is full of vanity. Fostard is big on attacking people for their physical features, especially when she’s jealous of someone. Fostard makes photoshopped pictures of making fun of people for their physical features and goes all out on trying to hurt them.

This self proclaimed California 9 (fucking retarded), boast weekly about how she’s attractive and how she has a flawless body and that how men would be willing to spend big money on her. Fostard goes on weekly Twitter rants tweeting for hours about hot men and how she loves them yet she can’t accept the fact that one will NEVER want her!

I don’t have any education nor training for psychology, but this cross eyed monkey has a personality issue in which she sees herself that most people don’t see, which is an unattractive aging cross eyed monkey! 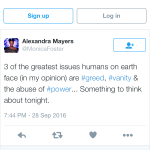