Despite the fact that Monica Foster is losing every little thing that she has in life, which is including her hair as she is now going bald, she yet she has MEDIATION!

First off, Foster keeps running off with her faghag mouth and makes up lies and stories when it comes to mediation to make herself look good in front of the few low IQ supporters that she has. So let’s get the facts straight about mediation, shall we Fostard!?

When a person files for protection order, the judge reviews the application, if he/she decides that the case can be handled OUTSIDE of court and done in mediation, it saves the court time and money from hearing something that could possibly be a complete waste of its time! When a case gets referred to mediation, BOTH parties must agree to participate, not just one side Fostard! If one of the parties doesn’t agree, then a court date will be set for the hearing that may or may not have the judge grant the protection order.

Monica Foster applied for another TPO against Stadtmuller when she had to attend a discovery conference meeting at the Randazza legal firm. This is where Fostard met a black woman who is actually doing something with her life and doesn’t blame the white man and Jews for her faults and failures for the first time. Again, the case got referred to mediation and both parties appeared in person.

Foster only appeared thinking that this was a way to show off in front of idiots like Desi Foxx and Barry Nelson to make it look like she’s fighting those who “stalking” her. Fostard wanted Stadtmuller to not only never speak to her again, but to also agree not to get involved with the lawsuit against her! Sounds to me like Fostard was trying to get Stadtmuller to agree not to be a witness against her like certain people have already done!

On a quick note, mediation is done with a county worker who basically sits there and listens to both sides. It is not done in the presence of law enforcement like Fostard claimed that it was. A hearing for the TPO is done in a criminal courtroom with law enforcement present, which is known as a bailiff! What an idiot!!!

Anyway, Fostard kept playing victim of how she’s been a victim of stalking and bullying. She stated that she believed that Stadtmuller will attempt to kill her if she were to appear to court to fight Randazza. She then made an issue of Stadtmuller communicating with Donny Long and her other alleged stalker, Ari Bass. This mentally challenged retard wasted 4 hours of people’s time and life with her nonsense. Of course her time didn’t get wasted, she doesn’t work and she has no life. Once again, she provided no evidence to any of her claims other than just the words out of her mouth. What’s funny is that Fostard got mad and said that she has no issues standing in front of judge with Stadtmuller with her allegations with him, NEWS FLASH, the stupid bitch had her chance and she didn’t even appear! What a fucking idiot!!! Why didn’t Foster choose to stand in front of a judge and try to convince him that Stadtmuller is a dangerous person who may try to killer her, that has been stalking her, & that she fears for her life against? Why hasn’t she gotten law enforcement involved? Could it be because she knows that she can’t stand in front of a judge and convince him of her stupid shit and that filing phony police reports is a felony???!!!!

The thing about mediation is that both parties must come to an agreement and sign off on it, like a contract. Despite that Fostard had been on Twitter acting like she WON mediation, the moron is purposely neglecting that both parties had to agree that they wouldn’t speak to each other and that they both weren’t a physical threat to each other. Alas, Fostard is never honest as she always makes up stuff, twist facts around, & etc, which is why she’ll NEVER be a true journalist/blogger.

Monica Fostard has once again proven that she is dumber than a bucket of rocks! Who is buying her BS? A failed musician & another failed hooker who pimped her own daughter! What a fucking idiot!!!

I swear, Monica Foster is more dumber than Jethro from “The Beverly Hillbillies” when he smashed the wall thinking that a woman was stuck inside when, in fact, she was at the gate calling over the intercom!

Monica Foster, you are a FUCKING MORON!!! 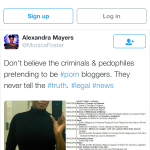