OUSTON – The Aldine Independent School District Middle School teacher accused of having a sexual relationship with a 13-year-old student was released Wednesday — hours after she turned herself in to Montgomery County police.

Prosecutors said Alexandria Vera had a sexual relationship with one of her students and also got pregnant by the eighth-grader.

An Aldine Independent School District peace officer was assigned to investigate an improper relationship between Vera and a student at Stovall Middle School, according to the District Attorney’s Office. 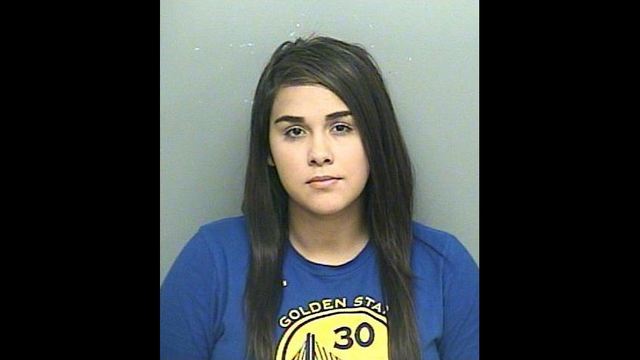 Vera told the officer that she first met the student during a summer school session. The DA’s office said the student tried to communicate with the teacher on Instagram. She later sent a message to the student after he didn’t show up for class, which led to the student asking for her phone number, prosecutors said.

Vera said the student asked if the two of them could hang out and she agreed, according to court documents. She told an officer that she drove to the student’s house to pick up the boy, and they drove around and kissed in the car, court documents say.

Vera said she drove to the student’s house again the next day because the student’s parents were not home, the report says. According to the report, Vera said that was the first time when she and the boy had sex. Officials believe that was in September.

Vera said the student’s parents not only knew about the relationship, they approved of it and allowed the teen to spend the night at Vera’s home in Spring, where they engaged in sex on a regular basis, according to court documents. She told an investigator that she would drop him off at home in the morning so he could catch the bus to Stovall Middle School, prosecutors said.

Vera told an officer that the school had an open house in October, when she met the student’s parents. After the open house, Vera went to the student’s home and was introduced as his girlfriend to his parents. According to the report, Vera said the parents were accepting of their relationship and she was invited to family gatherings.

Parents to whom we spoke were in disbelief.

“(It’s) horrible for any father or any family member going through this situation,” Gerson Bonilla said. “When you send your kid to the school you think everything will be safe for them and everything. But I think this is something that is serious that needs to be investigated.”

Vera told investigators that the relationship with the student grew, and they continued to have sex and spend time together. According to court reports, Vera said she got pregnant with the student’s baby in January. She told the officer that the student’s family was told about the pregnancy and that they were supportive and excited about the baby, prosecutors said.

Court documents said Vera had an abortion because she got nervous when Child Protective Services showed up at school in February to question her and the student about their relationship. The DA’s office said Vera denied the relationship then.

An officer did a forensic examination of Vera’s phone. According to the report, many messages between the teacher and the student were consistent with what she had said.

She faces a charge of continuous sexual abuse of a child.