“Even though we’re known worldwide as the unparalleled leader in live adult entertainment, this might be our biggest feature performance of the year,” said Ron Nady, the club’s manager. “With all of the media hype surrounding Donald Trump’s inauguration, we just couldn’t help but notice how ridiculously hot his wife is. I mean, her body is absolutely stunning, and here at Little Darlings, we admire and respect women instead of insulting them. In that vein, we worked tirelessly to find the sexiest Melania Trump look-alike we could, and I think we found one who’s spot on.”

“She’ll be performing nude shows on the 6th and 7th, and we expect to draw a crowd of at least a few thousand people for each show,” continued Mr. Nady. The club is also searching for an Ivanka Trump look-alike, who he describes as “equally as milfy.” 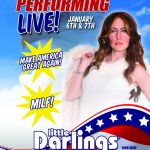